Humanism in the Continuation School, Board of Education Pamphlet 43, HMSO 1921 ( Blog Part 1)

The reason for this report is that the 1918 Education Act sought to provide schooling for children aged 12-14 and continuation education for 14-16. Of all the issues, apart from taking children out of work, exploited child labour in agriculture and industry, which was battled against by business and parents in Northern England, was the lack of training or personal development for teenagers, millions employed in London and the cities as cheap, unskilled labour, replaced as they get older, and left destitute.

The country faced bringing into its day schools and, after 14, into part-time continuation education, all its teenagers. Though the Bill allowed for exemptions due to work provision for children over 12, in specific circumstances. It was a Bill based on compromise, and resulted from a long process of delays, negotiations and blocks, mainly on the issues of church schools potentially losing their monopolies if they were the only schools in the neighbourhood, and industrial and agricultural bosses seeking to maintain their cheap supply of child labour.

"The Education Act of 1918 foreshadows the establishment of part-time continuation schools for the entire adolescent population of the country, with the exception of those already receiving full-time instruction in secondary schools and elsewhere. This means that the administrative difficulties involved, such as the provision of buildings and teachers for millions of additional scholars, the Act implies the setting up of a type of instruction which is new in kind, in as far as the conditions which have made it inevitable have never existed in the world.

"These conditions have not been created by the immediate international crisis... The advent of industrialism has made the world one, had established human society on a basis of machine production, and has perhaps affected the life and thought of man more profoundly and universally than any material change in his history since he first learnt to use fire and make tools."  p5

What would be this 'type of instruction which is new in kind'?  Referring to practice in already existing in technical continuation evening schools, and the scarce evidence for Humanism in day schools, this pamphlet builds on successful practice and the principle that the foundation of education is the development of the human being, the human as a cultural maker and participator in community life and democracy. For this was an Education Act not about the few, but about all.

It always amazes me how some academics and speakers from the alternative education field revise the history of schooling with the simple claim that our present schools are relics from an industrial past, and that schools like Sudbury Valley are a new revolution, or others talk about the age of creativity, of communication, or e-technology, and the redundancy of the industrial school.

They bleach history of teachers, school inspectors, professors, suffragettes, politicians, Drs who saw the effects of the industrial revolution as a need to humanise our schools, to alleviate the worst effects of industrialisation, and poverty, to 'liberate the child in the school' as the New Ideals Community not only proclaimed, but lobbied, created models of practice, looked for further models, and shared them. Earl Lytton, the politician who guided the 1918 Education Act through the House of Lords with such skill that it was recognised by all sides, was founding member and President of New Ideals in Education.

Though there are many tensions and issues over the image of freedom and development of the child, this pamphlet expresses some of them, its philosophy is that culture is created by everyone, and not an elite, and that the Humanities is vital to the development of the human being.

"Humanism is as wide as the human spirit; and in education it means the awakening and liberation of this spirit in the individual child by cleansing the channels and increasing the flow of his self-expression, by making him conscious of his heritage and of his true function in society, and lastly by teaching him to take flight upon the wings of imagination." p9 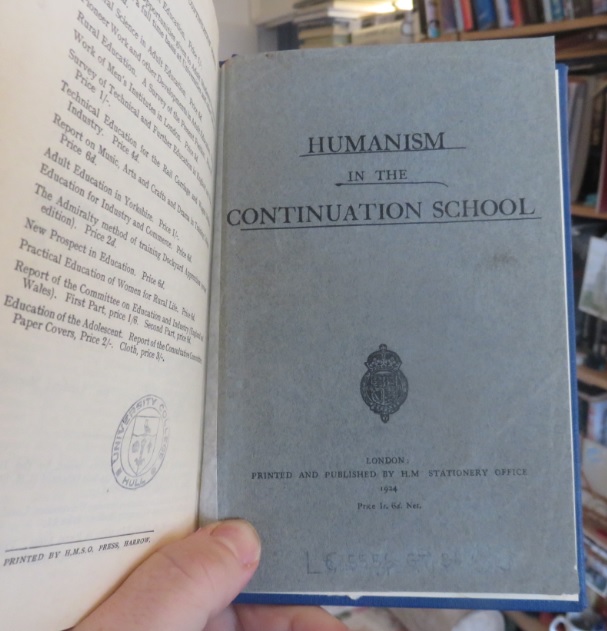 This echoed the values of the New Ideals community, it is the voices we hear now from our children, frustrated parents and teachers; and those marketing 'innovative' tools, methods and schools; and even the politicians worried about the future of democracy and the rise of racism, fear of the stranger, and the issues of identity and community, but without the depth of the discussion that was present in the 1918 debate, the question of why we have schools... Within our present debates we will fail unless we regain the history to make our schools fit for developing human beings. This history is not about a golden age, it is not about resurrecting methods, or theories of human development, it is about, as Wilson, among many others, argues in this pamphlet, our identity is built around our communities, our culture and our history.

"But the essential subjects of Humanism are those which begin with man, among which art, literature, music, history, geography and economics are clearly of greatest immediate importance. Manifestly it will not be possible to teach all these subjects in the continuation school. What we have to do is to start the boy and girl on the right road so that they may find matters out for themselves." p9-10

With the lack of hours for continuation schooling for over 14 year olds, like today with the cramming of subjects, once defined by a National Curriculum, now defined through exam boards and Inspectors, Wilson recognises that it is more important to generate the child as a life long learner, who willingly engages in schooling because they see it as part of their humanity. Sir William Mather, the industrialist who funded booklets of case studies of such practice, stated that the primary school was successful only if it created children who wanted to continue to learn as part of  their teenage life.

"One of the main functions of education must always be to linkup each rising generation with the national life, to enrich minds of the coming race with those national memories which we call history and with that highest expression of the national spirit which we call literature, in short, to hand on the accumulated experience and tradition of the race to its sons and daughters..." p32

This links our identity with our schooling and our history and culture. We recognise it as part of our development of science, and also, more recently, different human groups struggling for their rights, but we fail in terms of our children, and in terms of our schools. If we use history in our present education debates, which is rarer even than references to philosophy, then it is normally as part of a propaganda point, made with simplicity and lack of research into the history quotes.

The old argument that there is not enough time in the timetable, one put by people who see teaching as a transference of knowledge and skills defined in a National Currculum set of subjects, is a view without a foundation for the school, except measurable output, and that old adage, you would not want an untrained, unqualified surgeon operating on your brain! In this pamphlet, as in the New Ideals in Education Conferences, which not only at every opening of their conferences summarise their own history, but states a foundation value that underlines the teaching and life of the school, for New Ideals this was 'liberating the child in the school'.

"Citizenship is not a subject, any more than 'character', 'devotion' or 'love of truth.' It is a spiritual principle, an atmosphere which must pervade all our teaching, inform all our educational plans." p32

The use of the student's experience as a learning resource, as a motivating starting point, as a way of creating a relationship with the teacher, as a philosophy to allow the student to explore who they are, and what they do, within the context of teaching history. We will find, time and time again, resemblances to the methods advocated and sold as new by our great industry of school and teaching innovation.

"...turn the humanistic class into something like a debating society... The problems selected for treatment must be real and not academic ones, problems which the students hear discussed at home and in the workshop, topics which are bandied about with heated prejudice in the daily Press. For what the teacher has to aim at is the encouragement of close reasoning, of respect for differences of opinion, of contempt for catch-phrases, of charity and tempered judgement; and these qualities are not to be obtained in set argument upon matters of indifference. The value of the tutorial class is that the students learn to think without passion, to weigh opinion in the scales of informed judgement, to get past the froth of partisan politics to the realities of the social structure..."

We will see how Wilson envisages the teaching of history in the second half of this blog...

An article based on Wilson's Pamphlet, and arguing for the inclusion of this history when we celebrate the history of Women's suffrage, 'Begin to Sing Once More... Why is it time to use the centenary of women's votes to transform our schools into communities fit for a democratic society based on equality?'