In Celebration of Children as Active Citizens: 1918 Ed Act


Imagine a bus of 45 children and their teachers from East London schools, an old Routemaster bus, with a conductor interrupting the chatter with a few words about the history and buildings that they pass. The kids are excited by the historic bus, and peer out the windows as London goes by. We even see a calvacade of police and a minister of government go by...

The bus has picked them up at their schools, and they are on a journey to celebrate them as activists in their schools, as school councillors etc, and to celebrate the film 'To Sir, With Love' and its scene of using the 15 bus to take the children for a day out to the Victoria and Albert Museum. More importantly it celebrates the school which the film is based on, St Georges-in-the-East, lead by headmaster, Alexander Bloom. E.R.Braithwaite's book, on which the film is based, is 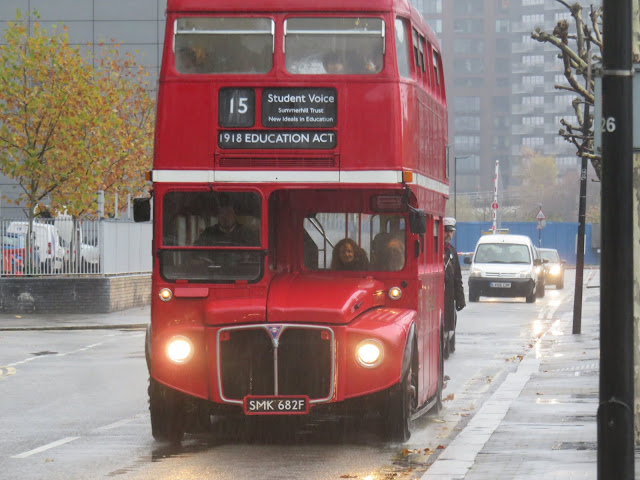 autobiographical, about him as an ex-RAF pilot and an engineer failing to get work in London after the war, and being forced to resort to teaching. He portrays himself as a hero in a failing school, with the progressive headteacher failing the children through low academic expectations and failing to control the behaviour of the children. A very different image is portrayed by HMI school inspectors, who stated in 1948 that this was the image of what all Secondary Modern schools should be. 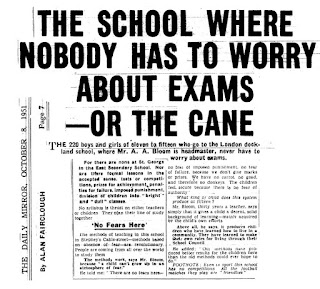 A school based on co-operation, democratic participation, learning through group research and peer teaching. One such project was a form choosing 37 different locations on the 15 bus route, self-selecting their research groups, writing and phoning the locations, and doing self-managed research for an exhibition to teach others about London, as reported in the Times Educational Supplement in 1951. This was A.S.Neill's, the state school teacher who created Summerhill, favourite state school, and he visited as guest of honour at their prize giving, an event to celebrate co-operation. 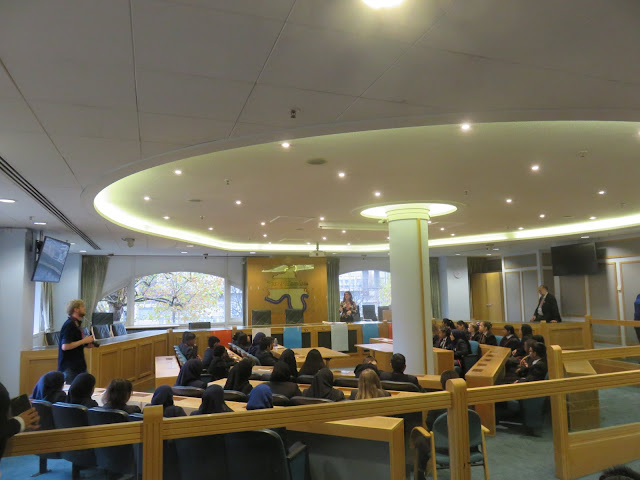 The children arrive at Tower Hamlets Town Hall, where they go to a committee room and chat to children from a different school, after a short introduction to the UN Children's Day, Local Goverment Day called #Ourday and the Being Human Festival, a festival celebrating humanities and their power to develop our humanity. They are given a little demonstration of what they are to do, with a ppt slide of Harriet Finlay Johnson's Sompting School children from early 1900s interviewing 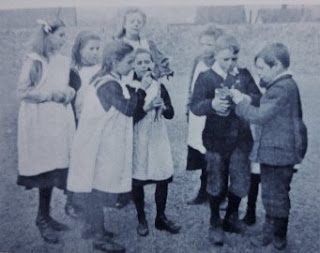 a girl holding a flower. Like 'hot-seating' now, she would get the children to choose an object, that they found on their rambles, research them, and then be interviewed, as if they were the object. Also in French schools a teacher would get the children to bring chosen objects to school for the class to describe and explore, through questions, and to create a card caption, with information they have researched, as a growing encyclopedia... lead by the children's objects, questions and research.


The workshop presenter, Michael Newman, stood infront of the children, and told them his chosen object was a flat cap, that he put on his head. He told a short story about the hat, it was his father's, who wore it in memory and pride of his father, a miner, who started working in the coal mines at 13 years old, and saw the older man he worked with crushed to death. The children were invited to ask questions, and then in their pairs, each student from a different school, took turns to describe their chosen object, person or event. 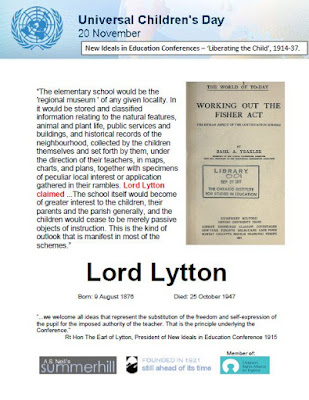 Next the children were told about the 1918 Education Act and Earl Lytton's view of what a school should look like, as a result of the Act. Earl Lytton was responsible for taking the Act through the House of Lords. He saw schools as cultural and museum centres of their communities, with objects, documents, maps, art, images, and interviews collected and researched, and displayed by the children, with support from their teachers.  A slide with a quote from the London County Council's report on their implementation of the Act was shown and partly read.

The children, in pairs were then handed quotes from Earl Lytton's speech for the 2nd Reading of the Act (23rd July 1918) and from the London County Council's report, and asked to discuss them, what was being argued, did they agree or disagree, what would be the reasons for this.

They then went into the Tower Hamlets Town Hall Council debating chamber, which had been booked by the directly elected Mayor, John Biggs.  After a welcome from the Deputy Mayor, Rachel Blake, celebrating Local Government Day (#OurDay) and UN Children's Day, and after answering questions, starting the debate with asking them what they thought of active learning. The children debated their views on learning, teaching and schools. 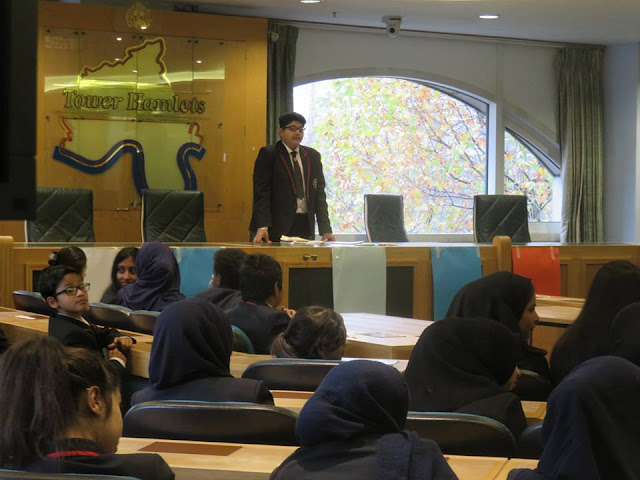 Next the students went back into the Committee Room to have a Fairtrade Orange break, for the 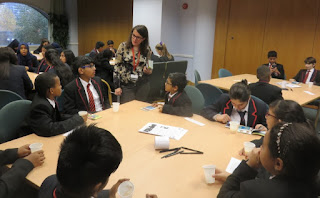 And before leaving they were given a final briefing about the rest of the day. They were told of Nellie Dick, who as an eighteen year old Jewish girl in Whitechapel, despite little support from the adults she created a school run by the children, as she was fed-up of the local school's propaganda of state support and reliance of obedience and children passively being taught. She created a 'Modern School', inspired by Francesco Ferrer. It was a school which the children ran, choosing visiting teachers/lecturers and creating their own lessons and courses.
They decided to go out into the streets to form a human shield around the protesting Suffragettes to protect them from violence. The school children are going to repeat this event, forming a wall of children in front of the statue of Millicent Fawcett, in Parliament Square, as a celebration of UN Children's Day and children as active citizens.

Sadly the cakes ordered for everyone to celebrate the centenary of teenagers right to schooling was delivered late, and will be used with the school children and teachers at a later date.

The power point and teaching materials will be posted here shortly.

The next blog will be about the next stage in their No.15 bus trip... to the Whitechapel Gallery...